The headquarters of ID Carolina is currently in need of reconstruction. There is room here for powerful partners who can help us with rebuilding and the process of realization of the ID Carolina project as a whole. Help us make this dream come true!

We have a lot to offer… 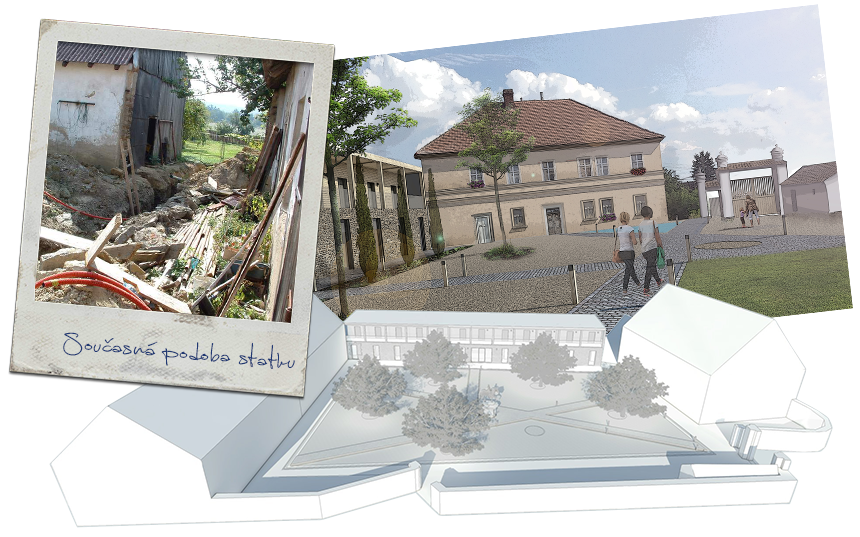 has become a new historic landmark in the Central Bohemian region. Thanks to its location and layout, the seat possesses significant potential from the point of view of multifunctional use. In order to take the presented opportunity, be useful to the seat’s close neighbourhood, and achieve the goals the institute has set for itself, ID Carolina needs powerful, capable, and trustworthy partners. In return for their help, ID Carolina offers plenty of opportunities valuable for their businesses, especially by taking advantage of the County Executive Ceremonial Assembly Hall of Central Bohemia.. 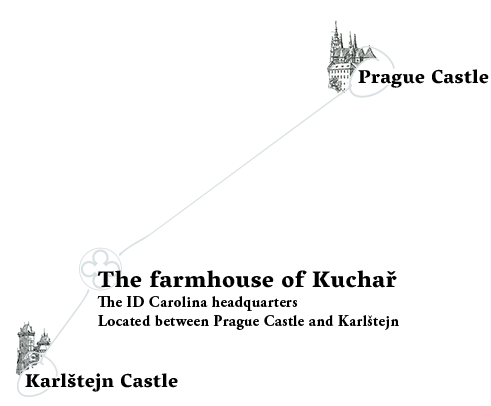 The village of Kuchař is an inconspicuous hamlet located in the picturesque countryside southwest of Prague, not far from the landscape park of Český kras. There are several stories describing how the village got its name. One of them speaks about a cook who settled down here with his family thanks to Charles IV of Luxembourg. The cook was supposedly long-haired (or “vlasatý” in Czech) and it is said that his many sons inherited his abundance of hair. So in order to tell them apart, the cook called them names that loosely translate to Long-haired, Hairy, Fairhair, and so on (in Czech “Vlášek, Vlasák, Vlasáček”…). Interestingly enough, to this day several families that carry the surname Vlasák still live in Kuchař and the surrounding villages…

Institutio Didactica Carolina operates on the historical site of the farmhouse situated in the centre of the village. Kuchař is located in the romantic scenery of the Berounsko region. The territory is connected to Karlštejn Castle, which used to administer farmhouses and hamlets in the area for centuries. The distance between Kuchař and Karlštejn is 6,5 km. Kuchař lies at a crossroads where roads leading from Újezd to Třebotov and from Rudná to Mořina meet. Today it is a part of a conurbation together with Vysoký Újezd and Kozolupy. There are numerous springs in the neighbourhood of Kuchař whose water contains various minerals and has beneficial properties. In the centre of the nearby village of Trněný Újezd we can find a small pond supplied by its own spring. This spring flows into a brook called Studený or Karlický, which in turn flows through the village. Further down the stream of the brook we can find the Petránka spring. Its high-quality mineral water used to be bottled and sold under the name Petránka for its outstanding healing properties and excellent taste until the end of World War I. There is also a so-called chilly water spring (stydlá voda karlická) nearby. This water got its name from its white coloration which causes the impression of ice crust covering the bottom of the streamlet. As a result, all twigs that fall down into the brook look as if they were covered by a layer of frost.

We plan to expand the seat of the European Institute of Charles IV of Luxembourg to provide respectable premises for the Father of the Homeland to guarantee room for:

Location of the village of Kuchař between Prague and Karlštejn

Well of Charles IV of Luxembourg

Aerial shot of the farmhouse of Kuchař – the ID Carolina headquarters

Ceremonial stairway to Assembly Hall
The map of Charles IV

We’d like to expand the seat of the European Institute of Charles IV of Luxembourg to provide utility premises for:

Keep an eye on our Facebook activity so that you don’t miss anything!
https://www.facebook.com/IDCarolina.cz